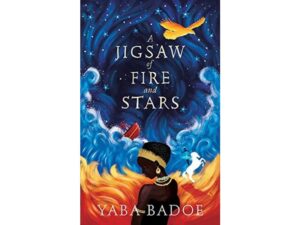 A Jigsaw of Fire and Stars by Yaba Badoe

Fourteen-year-old Sante isn’t sure where she comes from, but she has a recurring dream of escaping a shipwreck in a sea chest as a baby with her lifelong companion, golden eagle Priss. In the chest was an African bamboo flute, a drum and a dagger inlaid with diamonds. Sante was found and raised by Mama Rose, leader of a nomadic group of misfits and gypsies. They travel around contemporary southern Europe, living off-grid and performing circus tricks for money. Sante grows up alongside two twins, knife-thrower Cat and snake-charmer Cobra, whom she is in love with. During a performance in Cadiz, Sante recognises two men from her dream. They come after her to retrieve the treasures from the sea chest. Sante finds out that she is an Ashanti princess, whose parents probably perished in the shipwreck. After Cat rescues a beautiful red-haired girl called Scarlett from a gang, Mama Rose’s band are forced to flee the city. But Sante and Cobra stay behind, determined to find out more about her family and where she came from. A Jigsaw of Fire and Stars by Yaba Badoe