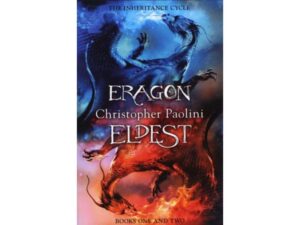 ERAGON. When Eragon finds a polished stone in the forest, he thinks it is a lucky discovery – perhaps it will buy his family meat for the winter. But when the stone becomes a dragon hatchling, Eragon soon realizes he has stumbled upon a legacy nearly as old as the Empire itself. Overnight his simple life is shattered and he is thrust into a perilous new world of destiny, magic and power. With only an ancient sword and the advice of an old storyteller for guidance, can Eragon take up the mantle of the legendary Dragon Riders? ELDEST. Eragon and his dragon, Saphira, have just saved the rebel state from destruction by the mighty forces of King Galbatorix, cruel ruler of the Empire. Now Eragon must travel to Ellesmera, land of the elves, for further training in magic and swordsmanship, the vital skills of the Dragon Rider. It is the journey of a lifetime, filled with awe-inspiring new places and people, each day a fresh adventure. But chaos and betrayal plague him at every turn, and as his cousin Roran fights a new battle back home in Carvahall, Eragon is put in even graver danger…