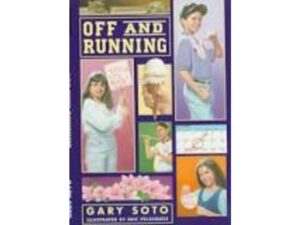 Off and running by Gary Soto

The biggest race of the school year is on! Fifth-grader Miata Ramirez is running for class president. Her best friend, Ana, is her running mate. The girls are stunned when they learn they are running against class clown Rudy Herrera and his friend Alex.At first Miata is certain she will win the election. … Off and running