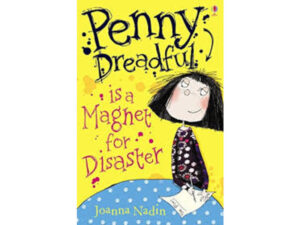 Penny Dreadful Is A Magnet For Disaster by Joanna Nadin

Penelope Jones is known as Penny Dreadful, thanks to her father. She has some very good ideas, they just don’t usually work out the way she planned and her boundless enthusiasm always lands her in awkward situations, such as giving her cousin an impromptu haircut with Dad’s razor, adopting an ‘abandoned’ dog, and somehow releasing the locusts from the tank at school just as the school inspector arrives. Penny Dreadful Is A Magnet For Disaster