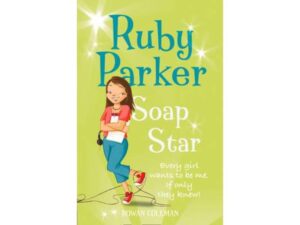 Child soap-star Ruby Parker discovers fame isn’t all it’s cracked up to be!

Ruby Parker has been acting in the glamorous soap, Kensington Heights, for most of her life. She is stunned when she overhears the script writers discussing whether to kill her character off, or to replace Ruby with a more beautiful actress! She has always felt like the ugly duckling compared to her stunning co-stars, but now more than ever she sees that everyone is disappointed how the cute, chubby dimpled four year old has morphed into a lumpy pimpled fourteen year old. Ruby is feeling more self-conscious than ever, and to top it all off, she discovers she’s got to have her first screen kiss – with the oh-so-gorgeous Justin de Souza, the soap’s hunk.