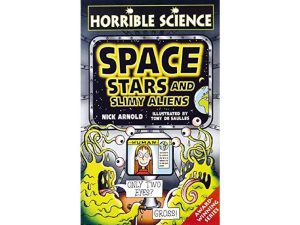 Science with the squishy bits left in| Space, Stars and Slimy Aliens is off on another planet| Are you spaced-out to discover: which astronomers killed people? why space makes the guts explode? what the moon smells like? If you think you can stomach the sick side of Science, then read on as we blast into outer space. Zoom around the planets with Oddblob the alien, find out which galaxies eat each other and see if you’ve got what it takes to be a staggering stargazer. With fantastic fact files, quirky quizzes and crazy cartoons Space, Stars and Slimy Aliens is out of this world| Science has never been so horrible|