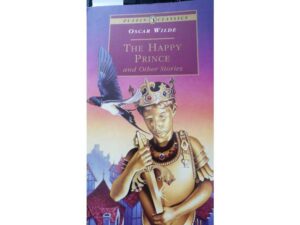 The Happy Prince by Oscar Wilde

He landed between the feet of the Happy Prince. ‘I have a golden bedroom!’ he thought. But as he put
his head under his wing, a large drop of water fell on him.
He looked up.’ That is very strange!’ he thought.’ There is not a cloud in the sky, but it is raining!’
Then another drop fell. ‘I cannot stay on a statue that does not keep me dry,’ he thought. ‘I must find
another place.’ And he decided to fly away. But as he opened his wings, a third drop fell. He looked
up and saw — Ah! What did he see? The Happy Prince