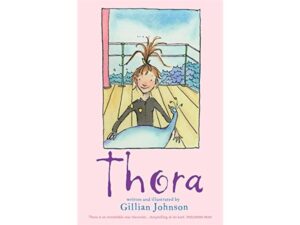 ‘Ten years at sea, ten years on land …’ It’s time for Thora – half-mermaid, half-human – to leave the sea and join the rest of us on dry land. She’s ten now, and the Sea Shrew’s prophecy says that her days on the deep are done. Leaving her mermaid mother and taking her pet peacock, Cosmo, Thora does her best to settle down in the seaside town of Grimli. But trouble is brewing – as it so often is, when Thora’s around – and she comes face to face with Frooty de Mare, a fat-cat businessman who hates mermaids …Thora’s nothing if not determined, though. She’ll stop Frooty’s sinister plans, whether he likes it or not …