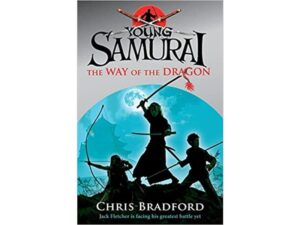 Young Samurai: The Way of the Dragon

June 1613. Japan is threatened with war and Jack is facing his greatest battle yet. Samurai are taking sides and, as the blood begins to flow, Jack’s warrior training is put to the ultimate test. His survival – and that of his friends – depends upon him mastering the Two Heavens, the secret sword technique of the legendary samurai Masamoto Takeshi. But first Jack must recover his father’s prize possession from the deadly ninja Dragon Eye. Can Jack defeat his ruthless enemy? Or will the ninja complete his mission to kill the young samurai . . .

Young Samurai: The Way of the Dragon