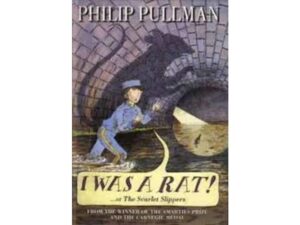 I Was A Rat! Or The Scarlet Slippers by Philip Pullman

‘I WAS A RAT!’ So insists Roger. Maybe it’s true. But what is he NOW?
A terrifying monster rampaging in the sewers? A money-spinning fairground freak? A champion wriggler and a downy card? Or just an ordinary small boy, though a little ratty in his habits? Only three people believe this version of the story. Only one of them knows who Roger really is. And luckily a story about her can sell even more newspapers than one about a rat-boy … I Was A Rat! Or The Scarlet Slippers