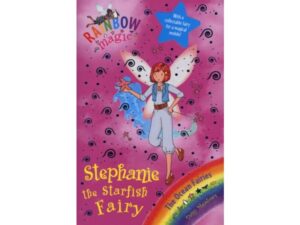 Get ready for an exciting fairy adventure with the no. 1 bestselling series for girls aged 5 and up. Rachel and Kirsty are visiting Kirsty’s grandmother when they are whisked away to Fairyland for the yearly Ocean Gala. Here, Shannon the Ocean Fairy plays her Magical Golden Conch Shell to ensure that the seas and oceans remain peaceful and ordered for the year ahead. Everything is going well – until Jack Frost snatches the conch shell and breaks it into seven pieces. Rachel and Kirsty, along with the Ocean Fairies, must get the pieces back before chaos takes over the oceans! ‘These stories are magic; they turn children into readers!’ ReadingZone.com Read all seven fairy adventures in the Ocean Fairies set! Ally the Dolphin Fairy; Amelie the Seal Fairy; Pia the Penguin Fairy; Tess the Sea Turtle Fairy; Stephanie the Starfish Fairy; Whitney the Whale Fairy and Courtney the Clownfish Fairy. If you like Rainbow Magic, check out Daisy Meadows’ other series: Magic Animal Friends and Unicorn Magic!