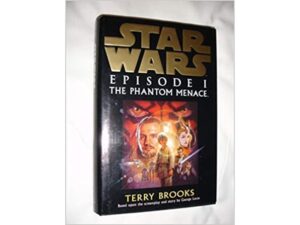 The Star Wars Episode I: The Phantom Menace novelization was written by Terry Brooks and published on April 21, 1999, by Del Rey. It is based on the script of the film of the same name and released with multiple covers, including Darth Maul, Obi-Wan Kenobi, Anakin Skywalker and Queen Amidala.

The path has been placed before you ,Anakin .the choice to take it must be yours alone;