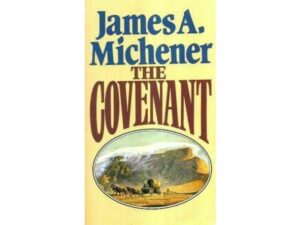 The Covenant Novel by James A. Michener (paperback)

The novel is set in South Africa, home to five distinct populations: Bantu (native Black tribes), Coloured (the result of generations of racial mixture between persons of European descent and the indigenous occupants of South Africa along with slaves brought in from Angola, Indonesia, India, Madagascar and the East Coast of Africa), British, Afrikaner, and Indian, Chinese, and other foreign workers. The novel traces the history, interaction, and conflicts between these populations, from prehistoric times up to the 1970s.

Novel by James A. Michener