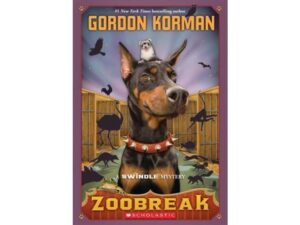 The sequel to Gordon Korman’s SWINDLE—the Man With A Plan is back!
When Griffin Bing’s class goes to a floating zoo, they don’t expect to see animals being treated so badly. They don’t expect to find Cleo, Dog Whisperer Savannah’s pet monkey who’s been missing for weeks. And they really don’t expect to have to hide the animals once they’ve rescued them! Hilarity ensues as Griffin’s team once more pulls off a heist . . . trying to break the animals back into a (better) zoo!