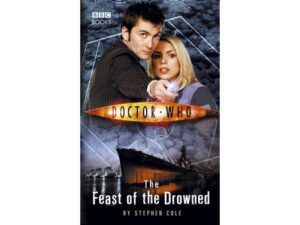 Doctor Who: Feast Of The Drowned

The Feast of the Drowned is a BBC Books original novel written by Stephen Cole and based on the long-running British science fiction television series Doctor Who. It was published on 13 April 2006, alongside The Stone Rose and The Resurrection Casket. It features the Tenth Doctor, Rose and Mickey.

Doctor Who: Feast Of The Drowned