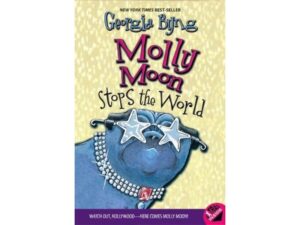 When Molly learns that Lucy Logan has a dangerous job for her — stop multibillionaire (and ultra-strong hypnotist) Primo Cell in his tracks — the orphan thinks this task might be more than she can handle. Thankfully, she has Rocky and other characters along for the trip, and Molly soon finds herself hobnobbing with Hollywood stars. But Molly learns that Primo has the power of permanent hypnotism that can only be broken by a secret password — how can she reverse his effects? Molly discovers a startling surprise — she has time-stopping powers of her own — and after Primo’s son saves them from near death, she finds out that her problems have only just begun. Molly Moon Stops the World